Niccolo Machiavelli once posed a question. He asked if it were better a leader feared, or loved. But one can never be simply one or the other. Fear may not inspire love, but used acceptably it will become your strength. And love. Loyalty. Inspiration. Are these not what binds us, even as we are not blood, into one family?

Kaneda Soturi is one of the Four Elders of Raz, and commands the elements of Flame and Shadow.

Kaneda Soturi (alongside Lysander Soturi ) was born to Apollo Cappadocia, mother stricken from records.  Her home Realm, the Old Empire of Calin, was destroyed, so very few actual records of Kaneda's life up until she co-founded Imperius Raz exist. Much of her past remians a mystery for the record have been destroyed or lost over time making her an enigma.

Kaneda is heterochromic, meaning her eyes are two different colors, in this case blue and red.  Whether this has anything to do with her Elements is unknown.  She sports an X shaped scar on her right cheek.  Reports of her father injuring her as a child are likely, but unconfirmed.  Kaneda employs a mechanical left arm, due to losing the original to a "training accident".  This arm, black and red in coloring, is specially forged to handle temperatures far over what a normal person can withstand. Her mechanical arm also employs a variety of technological advances allowing her to manipulates machine via wireless connection.

Kaneda's blades are infused with the sheer, raw power of her element.  As such, they can cut through many things easier than a normal blade, along with other attributes including ranged use and a localized wave of fire. 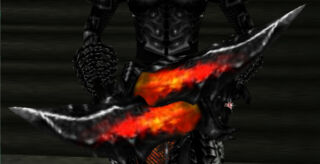 Kaneda's weapons, like all the other Elders', were forged as normal weapons; in this case, a pair of scimitars.  Over time, they bonded with her, their forms changing to reflect the power of their wielder.  The chains, however, were forged on by Kaneda herself after a duel.

Kaneda has a natural affinity for Fire, and uses it well in battle.  Observed offensive maneuvers include a flaming whip, a large volley of fireballs and a steady, though unstable, stream of fire . Also has pyrokinesis, the ability to excite molocules in an object to cause it to burst into flames with mere thought.

Kaneda is also able to use the Shadow Arts, due to her Heart shard.  Abilities include "shadow clones", in which she replicates her form from 4-8 times to create enemy decoys, phasing, which entails a focused, concentrated effort to pass through a solid object, usually out of anger, and a form of possession, in which a corporeal manifestation of power can temporarily control another person by Kaneda's command.

Retrieved from "https://raz.fandom.com/wiki/Kaneda_Soturi?oldid=4404"
Community content is available under CC-BY-SA unless otherwise noted.